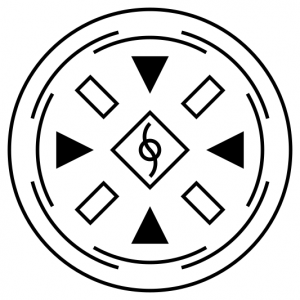 Some context is in order here.

Rachael is a Goddess of the Federation. The Federation is the name for the independent nation of many worlds that exists on the astral side of the universe. My dream group friend Kevin, who is extremely advanced in astral projection, helped found it long ago and projects into it during the day while other members of his system take a turn in participating in physical life through his body.

Kevin has provided this sigil that Rachael and he created that corresponds to a place in the Federation. If I focus on the sigil in a lucid dream, and get it accurate, it functions as a beacon for Rachael or the transit goddess Inzami, or whoever else is available, to locate me, and one of them will be able to open a portal through which either she can project into my dream or that I can walk through to enter the Federation. Kevin is usually asleep in his own dream world at night.

I’m assuming this is all true and accurate as I try to work with it, because that’s the only way to approach things like this, to give it a good effort and see what happens. Too much skepticism, in my opinion, is not intelligent or scientific. It’s limiting and cowardly. It also doesn’t work. Too much skepticism creates a process doomed to failure, particularly in these nonphysical realities where confidence and doubt have a huge and immediate influence over my control and abilities.

True exploration is putting yourself out there, pulling up anchor, and seeing how far you can go down the rabbit hole. There is no sense in hanging onto beliefs about the structure of reality when we are exploring unfamiliar areas of reality.

The below posts chronicle my attempts with the sigil.

Three Quick Astral Experiences – Too Much Sleep to Keep Them Going?

I was lying in bed after about 7 hours of sleep and after some time tossing around I couldn't get back to sleep. I was maxed out on sleep. A beam of light came from my right side. I opened my eyes and nothing was there. Ah, it wasn't from [...]

I woke up to an alarm at 4am. I pooped and went back to bed. I briefly went through the exercises of twisting my arms and body around and imagining myself standing on the floor and walking. I drift in and out, feeling my breathing getting deep and steady and [...]

Becoming Lucid in a Car, and Quick Sigil Attempt

I got up at 4am naturally and took a shower, got dressed, went back to bed. Dream It begins in a dream. I’m sitting in the back seat of a car. There are 3 others in the car. I almost start to interact with the people in the car, but [...]

Brief Attempt to Draw the Sigil in a Restaurant

I started in a dream where I was going through some kind of weird fast food line and I was getting pissed off about being charged $110 instead of $5 and was waiting for the manager to correct it. It turned out I had grabbed someone else’s receipt and everything [...]

It started with a dream. I was making out with a girl and then remembered there was some stuff I was supposed to be doing. Projection I tried San Felipe Park last time, and I had decided to alternate tasks, so I’ll start with the sigil this time. I’ve been [...]

Mid day nap, after sleeping 5 hours last night and 5 the night before. I had some coffee a few hours prior. I was grumpy from lack of sleep and getting easily irritated by people, but the coffee helped ease that. Dream It started with a dream I don’t remember [...]

I woke up at 4AM, couldn’t get back to sleep, so I finally got up at 5. I took a shower, had breakfast, and went back to bed. Dream I’m a guest in someone’s mansion. A noise started blasting, and I was like, is that my phone alarm? I go [...]