A Casino, Shifting Between Dimensions, and the Plan of Attack

A Casino, Shifting Between Dimensions, and the Plan of Attack

The last few months I’ve had some trouble getting into the lucid state. That isn’t to say it’s been totally dry.

First, a few I haven’t written about yet:

I’m exploring a large back empty hallway of a casino. I fly down it, pushing myself along easily against the walls and floor. This is some kind of back area where only the VIPs go. I touch the ceiling and think, What am I doing? I need to take charge of this dream.

I settle to the floor and stand there to collect myself and remember what I wanted to do.

Now there’s lots of people walking around and making noise. A Japanese staff lady in a skirt suit is giving me the sales pitch for the prostitution rooms. So that’s what this is. I wave her off and ignore her to try to concentrate. Her speech turns into a mindless “bloop bloop bloop bloop”.

Then I fade out.

I become lucid this same night a couple more times but fade out seconds later.

Jumping Out of Bed Over and Over

Another night, I become lucid and jump out of bed, flying feet-forward to stand on the floor at the foot of my bed. I keep losing it and do it twice more, never quite getting a hold on things.

On the last one, I do hold onto it, but I also lose lucidity. I’m scared of the shadows. I’m in my childhood house. I dash down the hallway and up the stairs to my parents’ bedroom, screaming the whole way.

(I woke up screaming… or whimpering, trying to scream. That was all within an hour of going to sleep. Yikes!)

I’m in a dream that’s like a violent video game where I need to roam the hallways with my team and kill the enemy.

My team is getting ready to head out of a safe area and go into combat. I lose my only weapon, a submachine gun. I’m irritated, but I’m willing go without it, because as usual I’m semi-lucid and know I’ll be fine, even if I get killed, because this is just a simulation. I can try to fight someone and take their gun.

I’m outside, running up a gentle grassy hill, and I become fully lucid. I stop. I treat the environment around me as an illusion, and it fades away. I wake up.

A portion of these awakenings after fading out were false awakenings.  I assumed when I faded out I was going to wake, and I didn’t bother checking the reality. Oops. I need to start checking every time.

What’s going on is I’m successfully rejecting the illusory dream environment, but every time I fade I assume I’m physically waking up when I’m not always. This “fading” feeling is the transition I experience between asleep and awake.

So I have some suspicions about what’s going on. I’ll explain…

So maybe I’ve had some success at entering an ONPR and I don’t know it, with the way I compulsively go back to the lucid dream I was in before without checking to see where I am currently each time I “wake”.

If I’m waking into an ONPR, it would make sense that I have a sleepy feeling from not being fully transitioned to that reality, much the same as the sleepy feeling we have on waking as we transition into physical reality. The difference is in the ONPR it is probably easier to transition back out of it right away, whereas when we move into physical reality we often get very anchored physically as a consequence of having a physical life and are unable to go back to sleep, ie: we give up on sleeping and we get out of bed and go about our day.

Now the other possibility, of course, is that I’m just “waking” into another illusory dream environment and not an ONPR at all, and then going to back to sleep into another dream, or in other words, I’m just bouncing between dreams. For reasons that are hard for me to explain, I don’t think that’s it.

Anyway, I have a better plan now.

One thing that I believe has slowed me down the last few months is I know I want to escape my dream world, but I feel conflicted about it because I don’t want to escape so hard that I physically wake.

In my Casino dream at the top of this post, it struck me that it was strange that even though I become lucid the environment did not change. I mean, that was typical, but it suddenly seemed strange to me that in one moment I’m totally caught in the dream, and in the next I’m standing there fully lucid and yet still standing in the ridiculous dream that I just rejected and yet is still there around me.

I don’t know what to make of that, but it’s bugging me, so I feel like I should pay attention.

Many months ago I made the choice to stop running around within the dream as if I could find the border of the dream and leave. I felt I needed to transition out of it somehow. I tried Rachael’s sigil, but I’m not sure I’m ready to effectively make use of it, and it also involved stabilizing myself in the dream so that I could draw the sigil.

The one time the sigil was apparently starting to work, before I lost concentration, was when I closed my eyes in the dream, basically ignoring the dream environment.

So I’ll break the dream and let it fall to pieces around me. Then I’ll see what’s beyond it. 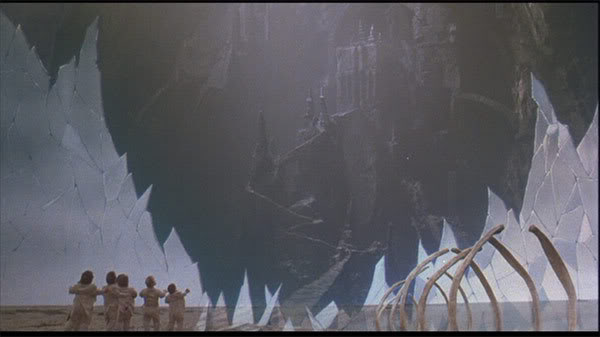 I imagine it like the movie Time Bandits. The party is wandering a desert. One of the dwarves throws a skull to break the glass illusion, revealing the Fortress of Ultimate Darkness.

My opinion is that when you are rejecting the dream environment, you “almost” woke up, making a deeper connection between the conscious mind and what it knows to be real, and your subconscious.
That is, your subconscious becomes aware about what it is “doing wrong” and it tries to fix it using more “real” experiences (that is, what it can grasp that would not cause you to reject it).

That sounds like something I do have happen! I’ll be non-lucid and believe I’m “awake” now, and I’ll talk about my dream I just had, but to just another dream character.

Exactly… that’s basically what I meant. The new dream is so “believable” that you keep going with it instead of questioning it/breaking it.

In my case I usually like to see what the dream has to offer, so even when I am aware it is a dream and I see strange things happen, I keep “exploring them” instead of “non accepting” them.
And in some very strange situations there’s a kind of “what could I change to make it more realistic” thinking that ends-up changing what just happened, like I play it again, but a little different.